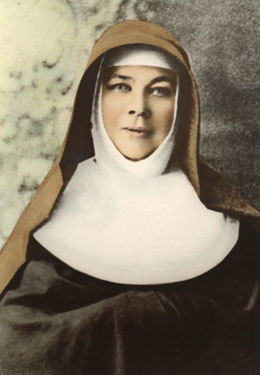 Our school was founded in 1908 by Mary MacKillop, a Josephite sister. Mary MacKillop is now Australia and New Zealand's first Catholic saint. Pope Benedict XVI canonised her at St Peter's in Rome on Sunday 17 October 2010.

On January 15, 1842 Mary MacKillop was born of Scottish parents, Alexander MacKillop and Flora MacDonald in Fitzroy, Victoria. This was less than seven years after Fawkner sailed up the Yarra, when Elizabeth Street was a deep gully and Lonsdale Street was still virgin bush. A plaque in the footpath now marks the place of her birth in Brunswick Street, Fitzroy.
Mary, the eldest of eight children, was well educated by her father who spent some years studying for the priesthood in Rome but through ill health had returned to his native Scotland until 1835 when he migrated to Australia with his parents. Unfortunately, he lacked financial awareness, so the family was often without a home of their own, depending on friends and relatives and frequently separated from one another.
From the age of sixteen, Mary earned her living and greatly supported her family, as a governess, as a clerk for Sands and Kenny (now Sands and MacDougall), and as a teacher at the Portland school. While acting as a governess to her uncle's children at Penola, Mary met Father Julian Tenison Woods who, with a parish of 22,000 square miles/56,000 square kilometres, needed help in the religious education of children in the outback. At the time Mary's family depended on her income so she was not free to follow her dream. However, in 1866, greatly inspired and encouraged by Father Woods, Mary opened the first Saint Joseph's School in a disused stable in Penola.
Young women came to join Mary, and so the Congregation of the Sisters of St Joseph was begun. In 1867, Mary was asked by Bishop Shiel to come to Adelaide to start a school. From there, the Sisters spread, in groups to small outback settlements and large cities around Australia, New Zealand, and now in Peru, Brazil and refugee camps of Uganda and Thailand. Mary and these early Sisters, together with other Religious Orders and Lay Teachers of the time, had a profound influence on the forming of Catholic Education as we have come to know and experience it today. She also opened Orphanages, Providences to care for the homeless and destitute both young and old, and Refuges for ex-prisoners and ex-prostitutes who wished to make a fresh start in life.
Throughout her life, Mary met with opposition from people outside the Church and even from some of those within it. In the most difficult of times she consistently refused to attack those who wrongly accused her and undermined her work, but continued in the way she believed God was calling her and was always ready to forgive those who wronged her.
She died on August 8, 1909 in the convent in Mount Street, North Sydney where her tomb is now enshrined.
There is a well documented, long and proud history of teaching sisters who have educated, and cared for Catholic children. In 1991 the last of the Catholic Sisters left after the Integration Act took effect. The school is now staffed by ‘lay’ teachers. St Joseph’s School continues to take the example from Mary MacKillop, who never saw a need without doing something about it. The staff encourages the students to strive for excellence and to inspire them to make a difference, both in the short time they are at primary school and in their lives in the future.